Traditionally a country of immigration, the USA has been attracting people from all over the world for more than 200 years. Although the immigrant boom is still going strong, many things have changed over time. Let’s take a look at some interesting US immigration and Green Card statistics.

Green Card statistics now and then

A huge economy with innovative industries, diversified regions and landscapes, glittering metropolitan areas, and the appeal of the unique "American way of life" – it's not surprising that the immigration and Green Card statistics show that America remains a popular destination for Green Card seekers from all over the world.

According to data from the Migration Policy Institute (MPI), more than 44.9 million immigrants (that is, persons with no US citizenship at birth) lived in the USA in 2019. This number represents an all-time high since the United States Census has been established.

Historical development of US immigration

When the Census was introduced in 1850, the population share of residents born outside the United States amounted to 2.2 million people. That number represented about 10 % of the total population at the time.

Until the 1920s, there was strong immigration, mainly from Europe. Yet, in the context of the Great Depression and World War II, a sharp decline in new arrivals occurred in the following decades. Restrictive immigration laws also made it very difficult for non-Europeans to immigrate to the US from the 1920s.

The proportion of the population not born in the United States declined steadily, reaching a record low of 9.6 million immigrants, or 4.7 % of the people.

However, since the 1970s, the number of immigrants has increased rapidly again, mainly due to massive influxes from Latin America and Asia. The shift was initiated by important changes in US immigration law (Immigration and Nationality Act of 1965, Refugee Act of 1980, and the granting of preferential treatment to Cuban immigrants during the Cold War). 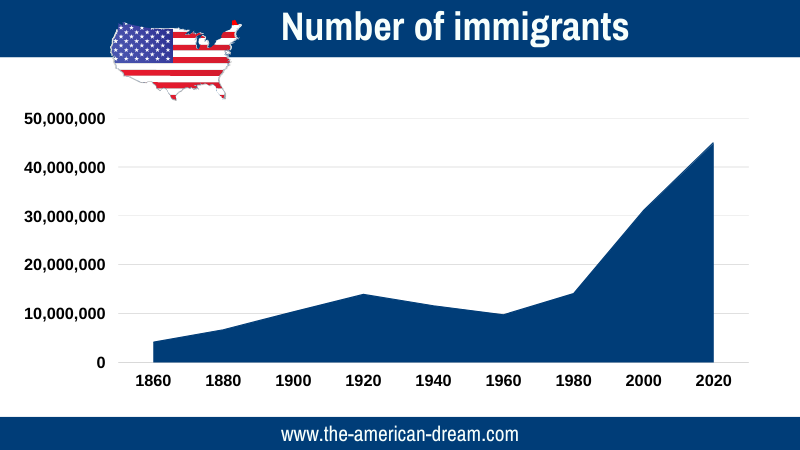 The immigration to the US has significantly increased over time.

In 2019, foreign-born residents accounted for 13.7 % of the total population in the United States. However, compared to previous decades, immigrant population growth has slowed between 2009 and 2019. 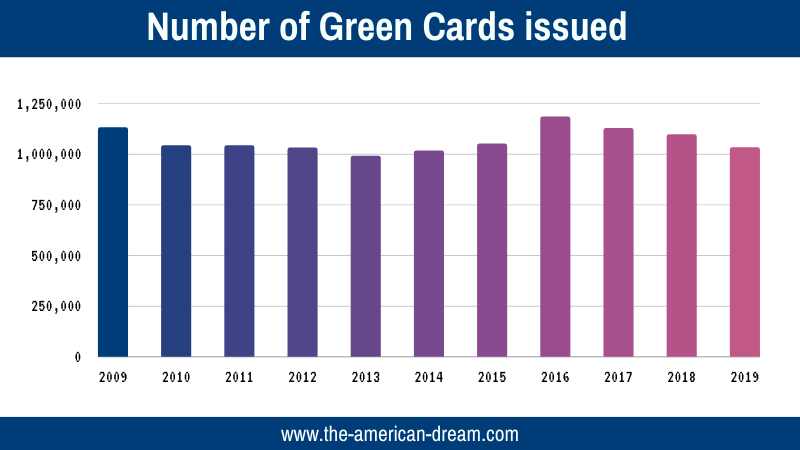 About one million Green Cards are issued every year.

Take your chance for a Green Card now! Apply now

In the 21st century, the composition of US immigrants has shifted significantly in terms of their countries of origin. While previously Green Card holders were primarily from Europe, today, immigrants from India, China, Mexico, and other parts of Latin America are at the top of these Green Card statistics.

Here is a breakdown of the largest immigrant groups by regions of origin over the last 30 years: 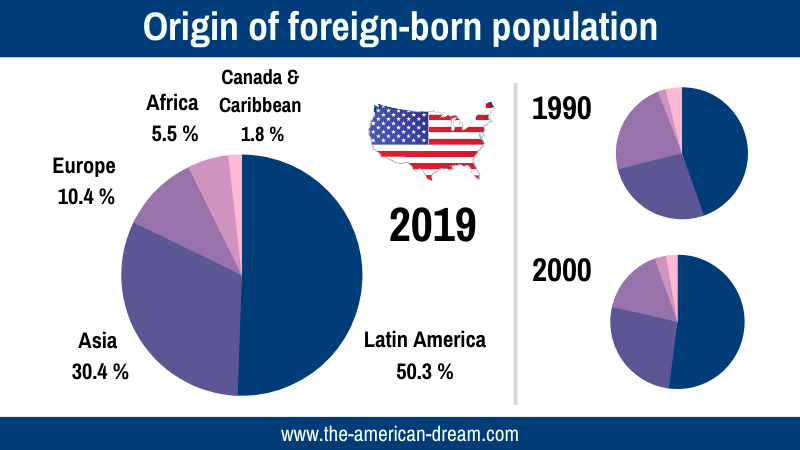 There has been a shift in the origin of foreign-born US population.

Broken down by countries, Mexicans accounted for the largest share of all US immigrants in 2019, at 24%. This is followed by immigrants from India and China (including those born in Hong Kong and Macau, but not Taiwan), at about 6% each. Other important countries of origin include the Philippines, with 5%, as well as El Salvador, Cuba, the Dominican Republic, and Vietnam, each with 3%. Persons from Guatemala and Korea each account for 2% of the total immigration.

The United States is a gigantic and diverse country, and therefore it is not so easy to decide on a specific place or region to settle down. So what places are new Green Card holders most drawn to?

However, while traditionally popular immigrant regions continue to have the largest absolute numbers of new immigrants, other states have experienced more significant relative growth in their immigrant populations.

Notably, North Dakota, Delaware, Kentucky, South Dakota, and Wyoming have seen their share of immigrants increase significantly over the past ten years.

From Green Card holder to US citizen

In many cases, Green Card holders who have moved their center of life to America become US citizens over the years. Naturalizations have increased dramatically in recent decades. In 2019 alone, USCIS naturalized approximately 844,000 Green Card holders.

Do you also want to make your dream come true and start a life in the United States? Sign up for the next Green Card Lottery. With a little luck, you could be successful soon! Sign up for the newsletter & enjoy benefits!
Get a 5€ voucher for the Green Card Lottery!
Sources: